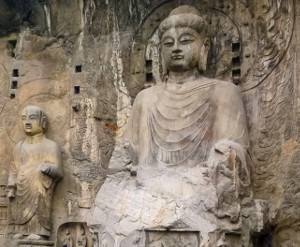 Gesture to the Gods … sign of respect, humility, gratitude for prosperity … successful merchants, nobles and emperors commissioned these places of rest and worship along the Chinese Silk Road – accessed by journeymen, pilgrims seeking, sharing knowledge.

Discovery of numerous manuscripts, wall and ceiling inscriptions in these grottoes, including secret chambers preserved historical findings otherwise would have been destroyed in earthquakes, wars and civil uprisings.

There are 5 known man-made Grottoes in China – 3 UNESCO World Heritage listed and most visited are Yungang and Longmen Grottoes in eastern China and Magao Grotto in western China, bordering Mongolia and Gobi Desert.

Largest and most impressive collection of Chinese art of late Northern Wei and Tang Dynasties (316-907) are found in Longmen or Dragon’s Gate Grottoes. Devoted entirely to Buddhism; high point of Chinese stone carving.

Sculptures are hand-crafted, no modern or mechanical equipment.

Caves and niches are in good condition, though weathered; no major damage from vandalism and/or natural disasters – serving as “one of greatest ancient stone carving art treasure houses in the world”.

Cave 6, surface area of about 1000 square meters is completely carved and painted – centered stupa pillar extending from floor to ceiling with carvings of standing Buddhas, Bodhisattvas, monks and celestial figures.

Dunhuang, frontier garrison in 111BC, gateway to the West – centre of commerce and meeting place of various people and religions.

Soft gravel conglomerate, unsuitable for sculpture or elaborate details, these were rock-cut spaces with a stupa and rounded apse (projections on buildings) at opposite end to entrance with high rounded profile painted roofs – today, only 5 wooden porches or fore-temples built out from cliff remain.

View some of finest examples of Buddhist art over 1000 year period; first used in 366AD as places of worship and meditation.

There are around 2400 clay sculptures, largest at 35.5m (116.6feet) high, damaged and repaired due to numerous earthquakes.

The art and story-telling pictorials, intricate details in carvings, immense statues created for continuity throughout time, indicated dedication and diversity of peoples who travelled along the land route of Chinese Silk Road, from Turkey in the West to eastern Chinese city of X’ian.

Without these paintings, structures and monuments, history would be forgotten, the past lost in the past.

Avoid visits in summer, as temperatures soar to high 40⁰C (104⁰F) – very dry heat with little shade. But visit, you must, to appreciate the intermingling of people and cultures, sharing of knowledge – an insight on how people lived in those times.