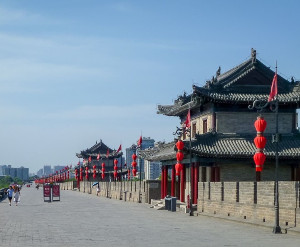 In June 2014, The Silk Road from Chang’an (Xian) – Tianshan corridor was designated as World Heritage Site.

Centre of Buddhist learning … home of scholars and translators; most famous being Pilgrim Xuanzang who brought back and translated copies of Indian scriptures … housed in The Big Wild Goose (Dayan) Pagoda library, built in 652 AD.

Sanskrit translations of Buddhist text, assisted by Indian monks in various monasteries; pilgrims from India, Khotan and Tibet was evident.

Crossroads of 2 major routes within The Silk Road network; Dunhuang sits at an oasis …edge of Taklamakan Desert. One of first trading cities encountered when arriving from west … an ancient Buddhist site … popular destination for pilgrims …was also a regional garrison town.

Western edge of Gobi Desert and north of Mingsha Sand Dunes (‘gurgling sand’ – noise made when wind rose over dunes); a vital resting spot for merchants and pilgrims alike.

Key location on The Silk Road to and from China for nearly a millennium … with ancient passes Yu Guan or Jade Gate and Yang Guan or Southern Gate.

Do you know that it is known as “the most remote city from any sea in the world” in the Guinness Book of Records?

History of trade caravans along The Silk Road … onto IIi River Valley from Turkistan … major hub throughout centuries … diverse intermingling of cultures, commercialism and religious beliefs.

Today, a multi-ethnic city with Han Chinese, Hui, Mongols, Uyghur and Muslims …commercial – industrial centre … due to oil and gas development in Xinjiang.

A journey not to be missed to understand and appreciate East-West influences in early days – of hardship, determination and resilience … to forge a better life for current generations.