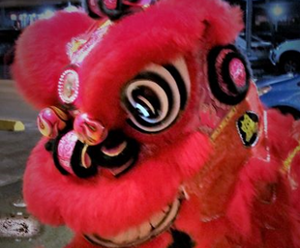 THE LION IS COMING!

The Lion comes alive; moving in rhythm with drum beats, cymbals and gong – ready to bring serious mojo to the celebrations.

Charged with positive energy, vibrant and exciting, Lion Dances are performed to bring good luck and prosperity … ushering in yet another New Year.

Chinese New Year, also known as Spring Festival in China, is celebrated globally by everyone – not only Chinese or Asians. All family and friends are welcomed and included in this auspicious festival.

A time to give thanks on what was reaped in the out-going year and to welcome the incoming year; usually with a bang – a VERY BIG BANG!

Families gather for ritual Reunion Dinner on New Year’s Eve; Lots of delicious food; Firecrackers are set off at midnight; Kids get to stay up late to enjoy festivities and receive ‘Ang Pao’ or Red Packets with money within; and Everybody gets to wear new clothes …

It is said, in legend, that the Jade Emperor (Emperor in Heaven) invited animals to come forth as designated calendar signs; first twelve to arrive would be selected. Rat, Ox, Tiger, Rabbit, Dragon, Snake, Horse, Sheep, Monkey, Rooster, Dog and Pig, came in that order and became animals of the year in Chinese Zodiac and Chinese Luna Calendar.

Lion Dance is one of the most important tradition at Chinese New Year; imitating various lion movements with martial arts agility. Performers are vivid and entertaining; skilful, strong kinship to kung-fu, or Chinese martial arts; rolling, wrestling, leaping, climbing and ‘kowtowing’, or bowing before audiences.

Founder of Lion Dance is said to be ‘Canton Lion King’, Feng Gengzhang, in early 20th century. Born in He Shan County, Guangzhou, he was instructed in martial arts and lion dance by his father.

Whatever the occasion, it is always a joy to watch this mesmerising dance!

This festival changes every year; based on movement of moon; usually falling between mid-January and mid-February.

In 2019, Chinese New Year will fall on Tuesday 5th February …

Year of Earth Pig; A Year of Fortune and Luck!

A Great Year to Make Money, and A Good Year to Invest!

Celebrate it with family and friends!