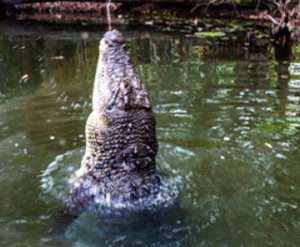 Living in Northern Australia or The Top End is often very interesting … apart from hot humid conditions, locals share their backyard with one of the deadliest pre-historic predators around – saltwater crocodiles. They are also known affectionally as ‘Salties’.

Treat Salties with respect – stay away from cooling rivers, creeks and waterways in Northern Australia. Think twice before jumping in for a swim – you may be unpleasantly surprised !

Best leave the capture of wild crocs to professional crocodile hunters – they are available to do the job at The Top End.

These days, crocodiles are an almost endangered species – due to over-culling in the 1980s.

Successful conservation has led to a sustainable population – very important for our eco-system balance; and locals have a healthy respect for these predators. It is also important for new blood or stock for our existing crocodile farms, operating under Australian Government’s strategic conservation program, dotted all over Northern Queensland.

Traditional owners of coastal country between Cairns and Port Douglas, the Yirrganydji people are noted for distinctive pointed-bow canoes for fishing and trading. Traditionally, news, dances, traded goods were regularly exchanged with neighbouring groups, including native foods from sea and forest until overtaken by loggers and farmers in early 1800s.

Today, most of the Yirrganydji people live in camps and reserves around Cairns.

Created with GIMPOne of the oldest crocodile farms in Queensland, started as a half-way house between Cairns and Mossman in 1933; along Hartley Creek … now known as Hartley Crocodile Farm in 1961 after owner, Gary Zillfleisch took over the business. Committed to conservation, Gary travelled all over Cape York catching crocodiles and turned Hartley’s Creek into a ‘crocodile stud’ farm, becoming the first in Australia to breed crocodiles in captivity, working on crocodile conservation and management.

Hartley’s Crocodile Adventures is the largest wildlife attraction in Northern Queensland and continues to be a ‘must do’ for locals, Australian visitors and overseas travellers.

Koorana Crocodile Farm, first commercial crocodile farm in Queensland, opened their doors in 1981 where owners captured crocodiles from the wild – both for locals’ safety and for breeding stock. It is said that “in the early days … over 100 crocodiles were removed from areas of public recreation and residential areas…”

Today, Koorana Crocodile Farm offers educational tours for all ages – giving information on crocodile behaviour, how to spot crocodiles at night, conservation, crocodile feeding, nest raids to collect eggs and hatching process. With population of over 3000 crocodiles, there is definitely plenty to see when you visit !

Do you know that saltwater crocodile skin makes the best and most durable leather products in the world, given normal use and care ?

Over 175 nations, including Australia, is a signatory to the convention of International Trade in Endangered Species of Wild Flora and Fauna (CITES); through CITES, the IUCN regulates international trade in crocodile and crocodile products; encouraging sustainable use of crocodiles for skin, meat; ensuring a natural renewable resource for sustainable commercial use.

Australian saltwater (estuarine) crocodile skins are most sort after for their attractive symmetrical pattern of small scales with ‘buttons’ on outer edge, square scales towards centre. No two skins are alike – crocodile handbags, briefcases, hats, book covers, purses, wallets and belts are made to world’s best practice in husbandry and sustainability – truly unique by nature.

Crocodiles, silent and dangerous are often also misunderstood. They are not pets and healthy respect of crocodiles through understanding their nature and habitat enables co-existence between us and them. Go into their territory and they will defend it – just happens that their territories are also good swimming and fishing grounds for their visitors … us !