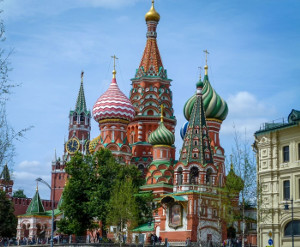 Ready to explore exciting Moscow in a day … tick!

Right in centre of Moscow city is cobblestoned Red Square; surrounded by imposing crimson walls of the Kremlin, rainbow coloured domes of St Basil’s Cathedral, and sombre Lenin’s Mausoleum – where most of Russia’s historical events unfolded.

Good start point and is also the hub of social activity – home to festivals, markets and celebrations for visitors and locals alike.

Commissioned in 1500s, by Ivan the Terrible, St Basil’s Cathedral, with onion-shaped domes were designed to take on shape of flame on a bonfire.
Legend had it that the Tsar thought it so beautiful that he orders the architect blinded so that he would never surpass this creation …

The Kremlin, biggest active fortress in Europe is now open to the public … pass through 2,235 metre-long Kremlin walls … 5 squares to wander through … numerous offices, 20 towers … world largest bell and cannon …

Bask in relaxed ambience that is this vibrant city.

Explore orthodox churches around Moscow, dating back to 15th century … Cathedral of Christ the Saviour, Novodevichy Convent, Church of the Prophet Elijah, Yelokhovo Cathedral are all centrally located around the city. With over 1000 churches and cathedrals in Moscow it is easy stumble into some of them without trying too hard!

Be aware – ladies must be modestly dressed, with head covering; gentlemen should wear long pants, without any head-gear.

As sun sets, and dusk approaches, take in the amazing sights of Moscow’s metro …countless footsteps all around … people pouring in and out of trains … trains entering and leaving stations …

Moscow has the most crowded metro in the world.

Moscow’s metro also serves the largest volume of passengers daily – about 9 million passengers on weekdays … 14 lines and 212 stations on over 360kms (224 miles) of tracks.

44 of these stations are cultural monuments.

First plans dated back to Russian Empire but construction only started in 1931; first stations opened in 1935. First line was part of the red line, 11km (6.8 miles), from Sokolniki to city centre. 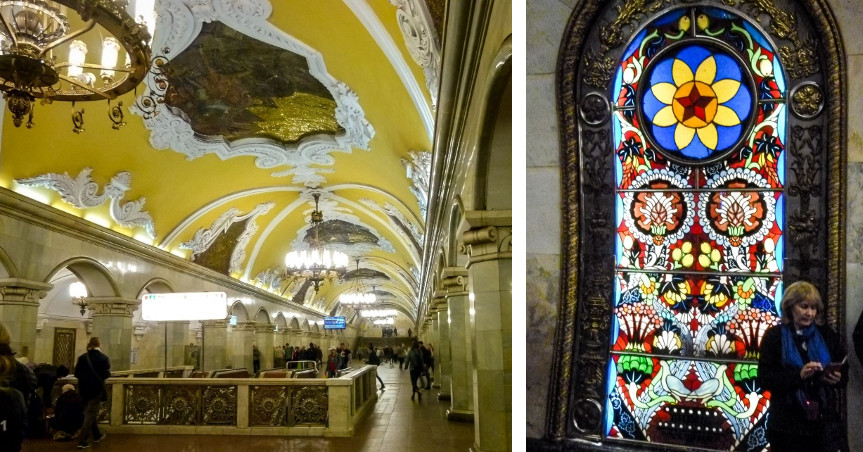 Most iconic is the ring line, tracing the Garden Circle (one of main avenues of city) – makes changing lines exceptionally easy. It was rumoured that Stalin put a coffee mug on the provisional plans, leaving a mark in shape and location of current ring line … and was constructed accordingly; as none dared to oppose the Leader’s note …

Today, Moscow’s metro is still expanding … but the 44 cultural heritage sites remain as most enticing metro stations to visit. 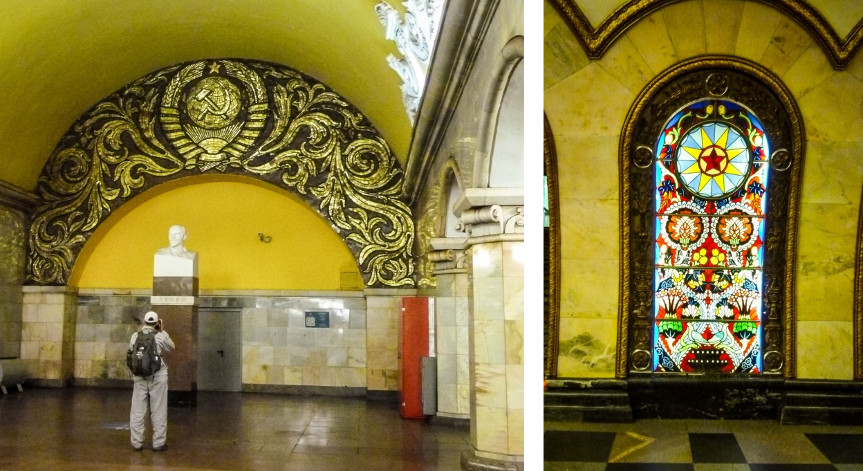 All too soon, it is nearly midnight; tired from day’s sightseeing and wanderings; feasting on wondrous sights Moscow offers to visitors … magnificent architecture, imposing buildings, cathedrals and intriguing metro stations … a day is definitely not enough …

Return visit is definitely on!